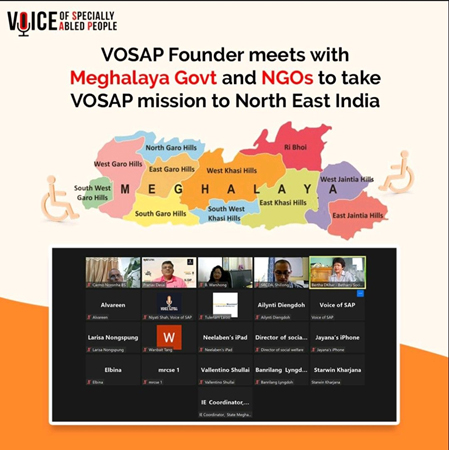 A ‘Smart Village’, is an inclusive environment where all people have equal opportunities to succeed.  We research and understand the challenges in communities we work in and share these on an inclusive Co-Innovation open Platform where companies, universities, government, or any individual can come together to share and help one another in solving problems for underserved communities.

With this core principle, Smart Village Movement is proud to introduce  Voice of SAP (VOSAP) to the state of Meghalaya to reach a wider community.

In a recent stakeholder meeting organized by SVM in collaboration with the Office of the State Commissioner for Persons with Disabilities, Government of Meghalaya, the VOSAP Founder, Mr. Pranav Desai, presented their mission to Meghalaya Government officers and NGOs working for the welfare of the specially-abled to understand the needs of these special population of the State and bridge these gaps through its initiatives.

Voice of SAP- Voice of Specially Abled People has directly helped 13,000+ SAPs and is currently present in 10 Indian States.

VOSAP aims to enable 7500 SAPs by working with reputed organizations in as many states as possible in next one year as a token of contribution to jumpstart “Aazadi ka Amrit Kaal,” realize the dream of Developed India by 2047

Under the Azadi ka Amrit Mahotsav, VOSAP raised $721K from its Donor community last month. We congratulate VOSAP for their efforts in making lives beautiful for the Specially Abled Community and look forward to collaborating in the future.

To operate as the “Transformation Catalyst” for the world to become an “ACCESSIBLE” and “INCLUSIVE” place where Specially Abled People enjoy equality as human beings, the opportunity to excel and contribute based on their abilities and live with dignity and independence.

Promote Accessibility, Education, and Employment with the help of Assistive Technologies for SAP to create an INCLUSIVE 21st-century society.

Join the VOSAP mission today. Download the VOSAP app on iOS and Android.

Smart Village Movement believes in inclusivity and equality to enable people from all walks of life and abilities to participate in the community and economy with dignity and self-empowerment.

Connect with us through admin@smartvillagement.org for collaborating and co-innovating solutions for rural development.