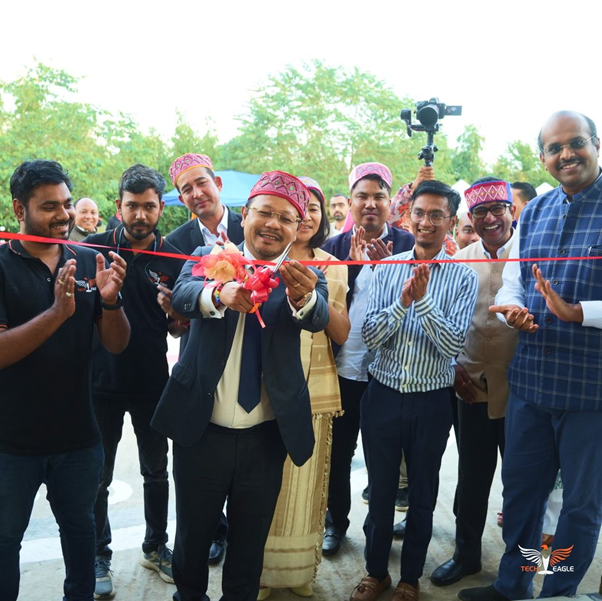 A New Era for Healthcare with Drone Deliveries

In a first-of-its-kind initiative, the TechEagle team, in collaboration with the Meghalaya Health Systems Strengthening Project, has provisioned the launch of Asia’s First Drone Delivery Hub & Network. The success of the pilot launched last year on 23 November 2021 with the Smart Village Movement has enabled the government to propel and strengthen the healthcare supply chain management of the state. It shall be used by providing rapid and safe delivery of healthcare-related items such as medicines, vaccines, blood components, and medical supplies across the state.

This revolutionary Drone Delivery Hub and Network situated at Jengal Sub-Divisional Hospital was inaugurated by the Health Minister of Meghalaya, Shri. James P.K. Sangma on November 05, 2022, and with this, Meghalaya became the first state to have a full-fledged drone delivery network for healthcare on-demand supplies.

Timely delivery of medicines is one of the most challenging tasks for any doctor, nurse, or paramedic, especially in remote and hilly terrains such as Meghalaya. With the introduction of drone deliveries, the challenges of last-mile access could be successfully addressed. Drones are increasingly being used in public health, as well. The military uses drones for surveillance and reconnaissance, but the civilian sector is also exploring the use cases of this technology. Drones can be a cheaper alternative than manned aircraft, particularly when it comes to transporting objects like medicines or equipment. The usage of drones allows for much faster and more reliable deliveries, which would have dramatic effects on medical treatment in remote areas.

All SVM pilots are collaborative initiatives with the technology partners and are based on the founding principles of Open Innovation and Co-Innovation. These concepts were coined at the UC Berkeley Haas School of Business, where the Smart Village Movement was born. This is how Tech Eagle and SVM came together to demonstrate a first-of-its-kind drone pilot in the state of Meghalaya.

Co-Innovation is a process where mutually beneficial ideas and processes are generated in collaboration with multiple organizations and stakeholders, each contributing their expertise in resources for the most cost-effective and innovative solutions.

Open-Innovation is one of the strongest founding principles of Smart Village Movement, second only to Sustainability. As key elements of 21st-century rural development, they are proving to be the magic formula for holistic development.

In September 2021, a milestone was achieved in Meghalaya under the Smart Village Movement pilot, which successfully demonstrated medicine delivery via a Hybrid e-VTOL drone. TechEagle’s Hybrid e-VTOL Drone Aquila X2 delivered the lifesaving drugs successfully from Nongstoin District Hospital to Maweit PHC, situated 25 km apart from each other, reducing transport time from over 4 hours to less than 25 minutes.

This pilot was conducted in collaboration between Smart Village Movement and  TechEagle with support from the Government of Meghalaya to start the last mile medicine delivery ensuring every citizen’s healthcare. The Smart Village Movement team prospectively mapped the gaps researched and assembled different stakeholders from various institutions to enable an organized pilot. It aimed to study the feasibility and cost-effectiveness of using new-age, smart logistics solutions to enhance time and resource management for the healthcare ecosystem in the state. The unique advantage of drones would cut down time and make delivery five times faster.

The success of this pilot demonstration was no less than a revelation. Hence, after a meticulous examination of drone deliveries, the Government of Meghalaya decided to incorporate drone delivery facilities into the state’s healthcare systems.

Smart Village Movement’s constant effort in co-innovating solutions to the rural challenges at the ground level has led to this juncture. SVM will continue pivoting and innovating with multiple stakeholders to optimize tech-enabled solutions.

The “Meghalaya Drone Delivery Network(MDDN)” is a hub and spoke network of the District Hospital (Jengal Sub-Divisional Hospital), which acts as the central hub from where all the flights shall take off carrying the healthcare-related items of all supplies to 25 PHC/CHC as Delivery spokes. Drones will supply the medicines, vaccines, blood, etc., from the Hub to all 25 locations on a scheduled and emergency basis in forward logistics. In reverse logistics, Drones will bring diagnostics samples to the Hub for faster turnaround time.

TechEagle drones can transport 2 to 5 kg healthcare items up to 100 km distance with more than 10X faster speed than land transportation with 100%  reliability and safety,  with a goal to introduce drones with a payload capacity of 25 kilos in the next few months. Over the subsequent phases of the project, the TechEagle team, in partnership with Smart Village Movement, will expand the usage of drones in new markets and other verticals.

Smart Village Movement has always strived to be at the forefront of such institutionalised initiatives to expand the horizons for using drones in new markets and use cases in the times to come and this smart initiative seems quite promising in an attempt to improve healthcare services in the state of Meghalaya.